So after one Spanish lesson, I’m a pro! Just kidding – google translator is my new best friend. This week has been filled to the brim with so many exciting events, opportunities, new foods and new friends. Although I’ve only been here for a week, it already feels like I’ve known some of these people forever. Every single person on remote year, both participants and staff, are the most genuine, kind, amazing, and unique individuals I’ve had the pleasure to encounter. Seriously, our group is AWESOME. Check out this sweet breakdown of Remote Year 2 – Battuta!

We started the week off with getting to experience the celebration of Yemanja, who is the goddness of the sea. The celebrations are part of the Umbanda religion which is practiced in Uruguay and Brazil. Everyone crowded to the beach to send their offerings to Yemanja which included flowers, watermelons, man-made boats full of trinkets, and jewelry. They wait until the sun goes down before walking into the sea to release their offerings. One of the best parts was getting to witness my first Uruguayan sunset and it did not disappoint.  A few of us even spelled out Remote Year II – pretty badass. 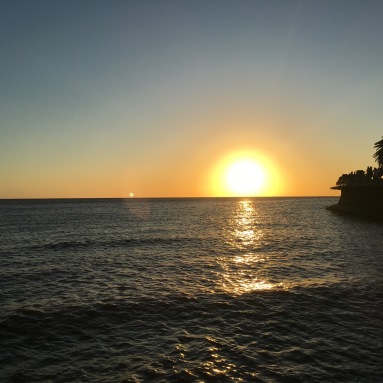 Although I haven’t started my job yet, my days have started to take on some structure. I started a fun run club which is a group of ladies who run every morning down to the water and along the rambla. Who would have thought – ME organizing a running group?! However, when you have people to keep you in check to make sure you get up each morning, it makes it a bit easier. Plus, the views on the run aren’t so bad either. From there I’ll head into the coworking space, Singeria. It’s nice to be surrounded by everyone even if I’m not “working.” I’ve been keeping myself busy with the frenzy of booking some amazing side trips while here in South America. Two bucket list trips I really wanted to do are Patagonia and Machu Picchu, both of which were officially booked this week. I couldn’t be more excited although I’ll probably die from all the hiking. I’ve also had time to catch up on my tv shows – I mean, I need to know what happens to Olivia on The Bachelor. I have priorities people.

On Friday a group of us went exploring to find the famous Montevideo sign. It’s basically like the I Am Amsterdam sign, but smaller. We learned how to take the local buses which was surprisingly easy and cheap. We felt pretty accomplished when we made it to our final destination.

This past weekend in Montevideo marked the start of Carnivàle. This carnival lasts about 40 days in which during that time there are a series of cultural events such as dance parades in the streets, street stages called “tablados” and an artistic contest in the “Teatro de Verano” (Summer Theatre) in Montevideo. We got to experience the start and boy did they begin with a bang. Our group started at an outdoor burger bar where we enjoyed some of the best burgers in town and some good drinks. We got our faces painted and then took some roadies (yes, walking with alcohol here is totally legal) down to the streets of the parade. There were throngs of people and although I couldn’t see so well, the music was contagious and everyone was having a blast.

The rest of the weekend was even more fun. On Saturday night we had a welcome party at a rooftop bar which turned into an epic 3am dance party. It was so great to see everyone come out of their shell and dance the night away. We have some awesome dance circles where I may or may not showed my dance skills, including the worm. Sunday we played bubble ball. Oh, you ask what’s bubble ball? Well, it’s when you squeeze yourself into a giant plastic hamster ball and try to play a game of soccer, or fútbol as they call it here. The plastic balls were in reality suffocating and not made for short people like myself, however it was hilarious watching everyone else try to maneuver around.

We don’t have kitchens in our hotel rooms so we have been forced to go out and explore the local cuisine each night. My favorite dinner so far was at a restaurant called La Fonda. They are a farm to table style restaurant where the menu changes daily due to what is fresh. They homemake their own pasta in house, and their menu is written on a chalkboard outside. I opted for the pappardelle mediterraneo which was homemade pasta, capers, olives, tomatoes, sundried tomatoes in an olive oil sauce. It was absolutely delicious and a place I will definitely be returning to. Our table also ordered the bruschetta for an appetizer. Unlike your usual bruschetta each piece of toast was covered with all different toppings varying from meat, pineapple, cheese and tomato. We paired our dinner with some mojitos and frozen margaritas.

Week one is officially over with 51 more to go. This upcoming week we’re scheduled for more Spanish lessons, a cooking class, and a dinner/beer tasting at a local brewery so be sure to watch out for my next post. Until then.. hasta luego! ♥♥♥

Where in the World is Hannah?